This is a tale of two halves.

A scrum half and a fly half.

It might also be called The Pickle of Pickle.

Suiting up almost every week in the role of fly half for the Reds is a scrum half – Nick Frisby. And we wonder why we aren’t having the impact we should, why we can’t put other teams under pressure and why we struggle to put points on the board. There is no way we can take it to some of the best teams in the world, and some of the best players in the world by not naming a specialist in the role of playmaker.

I want to make it very clear that this is not an attack on Nick Frisby.

Up until the National Rugby Championships last year I will admit I was never a massive fan of his, but he had a good competition and honed his skills – as a scrum half. Yes, occasionally due to the availability of reserves Nick Stiles as Brisbane City NRC coach shifted him to the playmaker role, but he was named as scrum half and played most of his matches as a scrum half. He played well and at 22 he still has a lot to learn and a lot to offer in the years ahead – as a scrum half.

But in spite of his inexperience at 10, Richard Graham continues to pick him as a fly half because we didn’t re-sign our utility backs Mike Harris and Ben Lucas for the 2015 season. And like Julia Roberts in Pretty Woman walking back to the boutique on Rodeo Drive – big mistake. Big. Huge.

We spent a lot of money on two backs for 2015 who are most definitely not utility. And just because you name them at 10 doesn’t mean they can play at 10 – James O’Connor and Karmichael Hunt aren’t playmakers, and both have demonstrated that. JOC before he even went to France and Hunt this season at the Reds.

So when Quade Cooper is injured twice in one season we have no genuine support in the Reds core team to fill the role of fly half. Which is where one would think the successful experiment of the NRC would come into play.
It successfully allowed Nick Frisby to hone his craft. It also allowed fly halves to do the same.

Which brings me nicely to Brisbane City player and Sunnybank fly half Jake McIntyre (disclaimer: I am a ‘Bank supporter). He had a pearler season for Brisbane City in the NRC and is a genuine 10 – he runs at the line, doesn’t stand too deep, understands positional kicking very well, doesn’t play forcings back with the best fullbacks in the world, and the man can kick goals.

It appears that no Reds ‘goalkickers’ can do that. The amount of points we have left on the field this season because we missed penalties and conversions is enough to drive me to drink.

In the 2014 NRC season McIntyre was responsible for at least 18 conversions and one try. He missed less than 15 per cent of his kicks. Can I hear a hell yeah?!

Why are we persisting with the failed experiment of Frisby at 10? Cast your mind back to the Reds v Sharks semi-final at Suncorp when Link moved Will Genia into the playmaker role due to an unavailability of fly halves. It still hurts thinking about it.

The Reds run the very real risk of ‘breaking’ Frisby before he reaches his peak at scrum half. Eddie Jones did this to an incredible number of players, like Daniel Heenan, by naming them too early to compete successfully at national and international levels. And it is worse because we are asking him to play another role.

I don’t want this for Frisby, and I want players named in the positions they should be playing. Why aren’t we naming McIntyre to start at 10 with the NRC under his belt and the season already so far down the gurgler you might as well get players used to the step up? What on earth do the Reds have to lose?

Vote #1 for Pickle on the bench as scrum half.

Vote #1 for McIntyre as fly half. 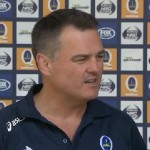