The last few weeks have certainly been a testing time for the Reds and the Reds fans – one I would happily like to wipe from my memory.  I didn’t think that it could get worse after the drubbing by the Brumbies a fortnight ago, but how wrong I was. In fact, that match seems like a very distant memory.

Perhaps even more worrying was the fact that I probably didn’t feel as upset as I should have in the light of the Karmichael Hunt revelations. Not because I am immune to a drug scandal, but because rugby seems to have lurched from one drama to another in the last 6 months.

Sure, it wasn’t the Reds who were at the centre of the maelstrom, but many Reds fans would have been left feeling deflated by association.  Two weeks ago the Reds CEO Jim Carmichael talked about rugby possibly making a play for Greg Inglis and the upsides of this move.

Perhaps Carmichael would revisit his comments in the light of the cocaine scandal that threatens to derail the start of the league season, because I cannot imagine many Reds fans would be willing to support a league import at the moment, no matter who was being discussed.

Carmichael’s comments are only a few months after the ARU made poorly communicated business decisions around the ‘participation fee’ and the insurance for players in grassroots rugby clubs around the country (the very heartblood of all sport is the grassroots level).

I am not really sure of the economic soundness of the ‘import a league player’ proposition or the message it seems the ARU are sending – buying in a player will solve our issues and be marketing genius.

Yes, many of the grassroots players are at the subbies level and a league import should be at the national level, but to a fan (and to those subbies who have toiled away at training and weekends, mostly buying their own kit) ‘buy in a league player’ seems like a slap in the face.

To the players in Premier Rugby who are edging to make it into the Reds squad, or even into the NRC, losing out on a possible spot because the money that could have payed for three of them was diverted into one big name player, also seems like a slap in the face.

Sure, buying in a player from another code is always an option, but I don’t understand how that can be cheaper (if we are as cash strapped as the ARU say) or better for the long term viability of rugby as a successful and profitable code in Australia.
How do we put a stake in the ground if the very thing that we identify with – players – don’t have a union identity?

As a fan I haven’t seen the ‘buy in a league player’ deliver more sustained bums on seats or increasingly generous sponsors – it might deliver great personal sponsorships to the player, but I haven’t seen a rising tide float all boats for a provincial side, or for the grassroots level.

Sonny Bill Williams might have been the exception to this rule if he played union in Australia, but more often than not the players don’t become quite the impact players we need and play no better than any other ‘union grown’ player.

As a fan who has laboured through the last six months, I think I might be asking too much for a great succession plan from premier grade to super rugby; a focus on core skills at all levels; a focus on exemplary leadership and behaviour on and off the field from players, coaches and administrators and some thumpingly good rugby from some good rugby players. And talking about thumpingly good rugby, how fantastic was the combination of Liam Gill and Adam Thomson in the last two matches? Now that is what we want! Thomson is a potential match-winning import for the Reds – a fantastic rugby pedigree and a forward to boot.

Lachie Turner is hitting his straps after so many injuries last year and has been a real strength at fullback – I would love to see him pull on the Wallaby gold again this year.

I cannot wait to see us in action against our old foes the Waratahs on Saturday night. Game on. 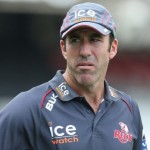